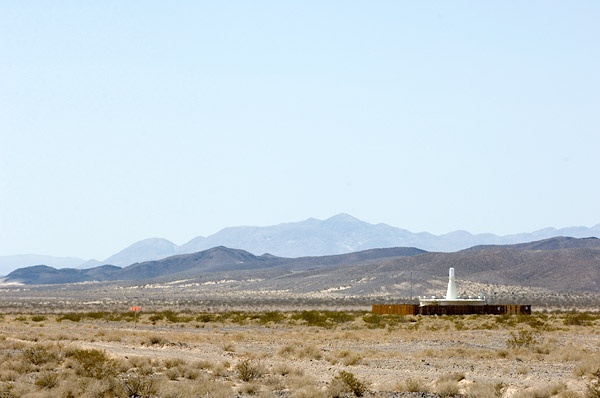 I saw it in the distance as I drove past it out in the Californian outback a dozen times in the decade before I learned to fly; even then I knew what a VOR was and how it worked (just not how to use one when it mattered). Such a nerd. I went out of my way to take a couple of photos of it back then, it seemed so unreal in context. It's still there, of course, and this image is from the same trip earlier this year that included the mystery town with both a Clown Motel and a Missile Test Firing Range (cool — my sort of town!)

A year's free YAFB subscription to the first reader in email or here who can identify which VOR it is, preferably because they've also seen it from the ground (or air) and / or can recognise the landscape (this should be easy…).

Comments:
Lots of the bits of California I saw look like that, and most VORs look pretty much like that--although the wooden fence is a bit of an innovation--but I want to play, so I'll say ... Linden.

Linden's certainly an interesting choice, particularly given the terrain around it…

Is that the BISHOP VOR near Bishop, CA?

Bishop's a better bet than Linden, but as someone who's spent a lot of time in and around Bishop (both the town and the VOR), I'd be wondering what's missing from the photo…

I'm thinking it must be one of these two. To add to the amusement, I'll give my answers in Morse code!

Ah, John, they're both good guesses (assuming you've got one dot too many in the second code (unless you're implying I've been in Florida lately :-) ), and I did see both of them from the ground during the trip (even if the first appeared to be on the sort of military land you don't take casual photos from)… but I did say "Californian Outback"…

I've flow over both, but once was at night and the other was is moderate to severe turbulence, so I didn't actually see them from the air. I'm using Google Earth to inform my guesses and I hope that doesn't disqualify me.

Hector (HEC) it is, right down there next to I-40 and the old Route 66… (and no, it's not OAK VOR after the apocalypse, as someone suggested in email :-)). I guess I thought the tough dry volcanic Mojave landscape was a dead giveaway, but as Aviatrix says, a lot of California looks that way, I guess. The wooden fence seems to be mostly to keep tumbleweed and snakes out.