Before each flight we sit in the clubhouse and discuss the approaches and the associated plates. With John's help I'm slowly getting better at picking up the devils hidden in the details of each approach plate -- the small print and marginalia that needs to be interpreted, or, more fundamentally, noticed -- and there's a bunch of minor (but very common) devils lurking below this evening's approaches. 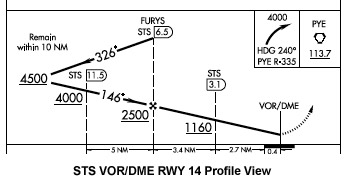 For example, the NACO plate for the VOR/DME RWY 14 approach blandly (and typically) shows the approach's vertical profile as a straight-line descent between STS DME 11.5 and STS DME 3.1. But the actual segment between the FAF (FURYS, STS DME 6.5) and STS DME 3.1 involves a descent of some 1350' in a little over 3 NM -- a bit over 400' per NM. This is steeper than the other segments on this approach; but, more importantly, at the canonical planned ground speed of 90 KIAS, that's a roughly 700' per minute descent. Not too bad -- if a little steep -- but the DUATS forecast has winds coming almost directly down the final approach course from behind us at about 15-20 KIAS. So we're going to have to descend at closer to 900' per minute or more, which is quite the descent rate in a little 172. Especially when getting so close to the ground (about 1000' AGL at the end of that segment)...

The plate for the VOR RWY 32 approach also has some small print that's essential reading -- firstly, "When local altimeter not received, procedure NA." This is pretty straightforward -- if you can't get the local altimeter setting from ATIS or Center, you can't do the approach -- but I can imagine someone missing this one day without thinking (there isn't a lot of terrain in the direct path of either STS approaches, but there are some nice mountains only a few miles to either side; the published MSA around STS is 5,900'). Secondly, it says that "S-32 Cat D DME minimums visibillty increased to RVR 6000 for inoperative MALSR." OK, we're not a Category D aircraft (sadly), but it's still a good reminder that the approach lighting is an integral part of the approach, and its being out of service will affect certain types of approach significantly.

Plus there's that old standby, alternates not authorised. But I don't miss that one easily any more...